Lateral flow assays have been used in clinical settings since the development of the pregnancy test in the 1980s. Today, they’re widely used in labs and clinics, and in veterinary, environmental, and field testing. They’re simple and quick to use and require only a small sample amount.

The company’s patented Thermal Contrast Amplification (TCA) technology was developed at the University of Minnesota. It is designed as a platform that can be used to process a variety of existing Lateral Flow Assay products and eventually become a system with its own proprietary LFAs. The company’s products include two “TCA Readers” that can be used in point-of-care settings or with current or next generation LFAs in hospital labs.

Two of the most significant drivers for Vigilant Diagnostics’ technology are 1) the need for early disease diagnosis to initiate on-time treatment procedures, and 2) the growing demand for self-diagnosis. The company focused initially on successfully validating its first TCA Reader on the diseases of Influenza and Malaria, then later expanded to also focus on other infectious diseases, including HIV and COVID-19.

The company has raised approximately $1.5 million in equity investment to date, plus $600,000 in non-dilutive research and development grants from U.S. federal and state governmental agencies. Additional grants are expected to be awarded in the near future. 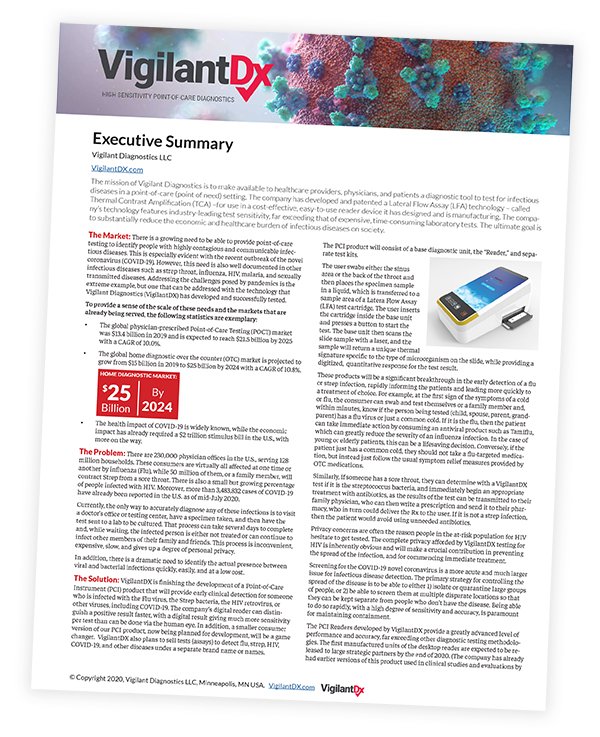 Request Executive Summary
Complete the form below and you will receive an email with a download link. If you do not receive our email within 1-3 minutes, please check your spam folder.

Ready to find out more?

Drop us a line today!

Connect With Us Now
Scroll To Top