On September 24, 2020, we were honored to be one of five startups invited to pitch in the “Home Health” session of a conference 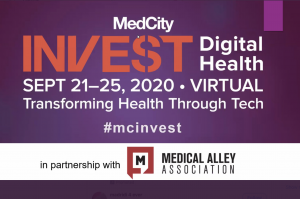 called MedCity INVEST Digital Health. This was the fourth year of the event, and the first to be held virtually via the Zoom platform. The event spanned five days and had a packed agenda, with many notable speakers and panelists from the healthcare and medtech industries.

Co-CEO Rick Carlson presented for Vigilant DX, talking about the company’s solution for Point of Care (POC) testing. He 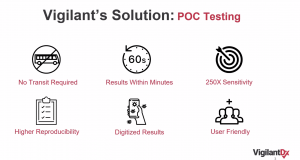 described the company’s proprietary technology, exemplified in its “thermal contrast amplification” (TCA) readers, including the small handheld version now under development, which will have application in the very large and growing market for home-based diagnostic testing.

Although the pitch was limited to four minutes, he was also able to share the company’s traction to date, as shown, including 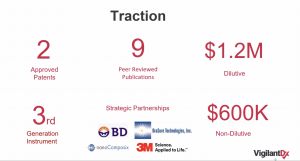 equity investment dollars raised, as well as the value of R&D grants that have so far been awarded to the company by U.S. government agencies.

Rick’s presentation was followed by six minutes of questions from the three great judges for this session:

It was a very successful event, and we thank the folks at MedCity News for the opportunity. We definitely recommend that you check out their whole lineup of recurring events. They do a great job!

This site uses Akismet to reduce spam. Learn how your comment data is processed.